You are here: Home / Archives for Annuity Business

One question that seems to come up on a regular basis is “should I use my IRA/401k dollars to purchase an annuity?” As financial advisors and planners we have to take a “big picture view” prior to answering, because it really depends.

What benefits or options are you seeking to get from your annuity that you could not get from an IRA placed in another financial vehicle?

Many CPAs have a blanket answer when questioned about IRA dollars being used in annuities –  it goes some thing like this “No. Your IRA already has tax deferral so their is no advantage to obtaining an annuity with your IRA dollars.” That answer for many retirees is incomplete at best! What about safe asset growth, income **guarantees, or income for life – not to mention a potential IRA “tax trap”?

For more insights into the IRA/Annuity question check out this short video.

This is a question that has been debated many times… check out this MarketWatch article by Robert Powell from 2005 for more insights into this discussion.

Do annuities belong in an IRA?

BOSTON (MarketWatch) — It is, without fail, one of the all-time great debates in the financial-services industry. Do annuities — variable, fixed or index — belong in an IRA? The answer, unfortunately, depends on who you ask.

Consumer advocates and industry experts point out it’s unwise to invest solely in a tax-deferred product, an annuity, inside an IRA which also offers tax-deferral. “Since money invested in an annuity grows on a tax-deferred basis, I’m not a big fan of using them in IRAs,” says Ken Little, author of “The Idiot’s Guide to Annuities.”

Others, including the National Association of Securities Dealers, agree. Don’t invest in a variable annuity# inside an IRA solely for its tax-deferral is the upshot of one notice the NASD sent to brokerage firms it oversees. And insurers don’t dispute that advice. Heather Dzielak, vice president of Lincoln Financial Group’s annuity business, says this: “If (a person’s) primary goal is tax deferral, variable annuities# within IRAs offer no additional tax advantage over the IRAs inherent tax deferral feature.”

But Little, the NASD and others do leave the door open for investors to put their money into such products for other reasons, especially if they understand the costs associated with the benefits they are buying.

Dick: Eric, frequently, we see articles from the investment industry, from CPAs, just financial magazines, and they talk about an IRA not belonging in an annuity.

Eric: That’s good. We’ve had clients, even the last couple of months here, they’re retiring. They’ve got 401Ks. They have these qualified buckets. It’s time to start spending these dollars. That’s their savings for retirement.

Dick: All these years, they’ve put this money away for their retirement to produce an income.

Eric: They’re starting to think about spending down their 401Ks or their IRAs.

Dick: What do their CPAs tell them?

Dick: Why would you want an annuity with tax deferral? That is the standard argument that’s used. What’s wrong with that argument?

Eric: You mean you can’t have double tax deferral?

Dick: Why would you need double tax deferral?

Eric: You can’t get that.

Eric: No. That’s what we always say. There’s no universal answer, but when it comes to tax deferral, do you need a double tax deferral? No. What are the other benefits that they really offer to you?

Dick: The reasons why, right.

Eric: You have IRA dollars; you’re saving for retirement. You’re now going to start to spend your retirement. What does an annuity do for you?

Dick: Safety, security, income **guarantees. In a down economy, in a volatile economy, it’s a sense of knowing where you’re going to be today or 5 or 10 years from now.

Eric: Just because I have an IRA it doesn’t mean I automatically get income for life?

Eric: But I have tax deferral.

Dick: Unless everything works out perfect or you have an annuity. In no way do we advocate with our clients or to those who listen to our videos that you put all of your money into an annuity.

Dick: It makes more sense when you’re younger to think that way, when you’re in that accumulation portion of your life, where you’re growing your dollars. It wouldn’t make a lot of sense to buy an annuity when you can have your money invested where it can potentially earn more and grow. No, that portion, but what happens is that same argument that’s used during those years doesn’t get carried over into the retirement years. It actually gets carried over instead of that transition where things change. Let me ask you a question here to get off the subject a little bit; where are taxes going?

Dick: Are taxes going down or up?

Eric: Let’s see here. If I had to be a betting man, I don’t think Vegas would give me good odds on this, but I would guess they’re going up.

Dick: I think you might be right. I think most of the folks that are watching this will agree with us. If taxes are going up, then what do I have if I have a pile of money I’ve never paid tax on?

Eric: You got a good deal, because you never pay tax on it.

Dick: What’s going to happen to it?

Eric: Is the government going to make me take these dollars and pay taxes?

Dick: Do you think maybe I have a trap here that I’m caught in, a tax trap? That’s what I see an IRA is, it’s very much a tax trap because we are likely to see increasing taxes as time goes by. Wouldn’t it make more sense to systematically be removing some money from that IRA, using it for the intended purposes of creating income and getting some money out of there so that it’s not all taxes in one large amount?

Eric: That sounds logical, but what would your CPA say? I’m making fun of CPAs right now.

Dick: What do CPAs do? In reality, when you think about it, they’re very, very good at saving us money on taxes in the year we’re going to file our return, or looking forward to the next year. Looking at the 20 or 30 years, a lot time . . . Folks, if you have one of those CPAs that looks 20 years down the line and projects things out for you, and look at ways to save you money, you have one of the rarest CPAs out there; they’re in the top 1% or 2%. Nothing against CPAs, they do a great job; they keep us legal, they save us money on taxes, but a lot of times, they’re looking at what can we save today. They’d rather defer some dollars from tax, not really thinking in terms of what’s happening with potential tax rates 10 or 20 years from now and getting that money out.

Eric: From a CPA’s standpoint, they’re thinking about tax now. Yes, if the answer is there a difference between a tax-deferred scenario between the IRA and the annuity? Of course not. If you’re saying, “What about the other benefits” Then, yes, that’s where the annuity, using qualified dollars makes perfectly good sense.

Dick: It does. When we say, “Never move IRA money into an annuity. Never buy an annuity with IRA money . . .”

Eric: Wrong. Take your personal situation and apply it. Basically, no, there are times when it does make sense.

Dick: There are. But everybody’s situation is different. They need to get a good advisor for that, a good local advisor. Thank you.

Eric: Have a good day. 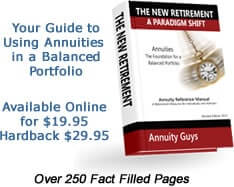